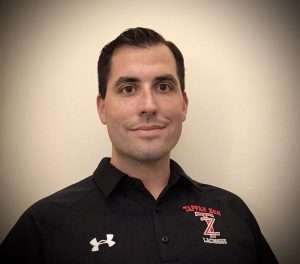 Andrew McIntosh is currently the Educational Technology Specialist for Valhalla Union Free School District in New York.  He was previously the head coach for Tappan Zee High School Boys Lacrosse.  During his time as the head coach for Tappan Zee he has been named Rockland County Coach of the Year twice in 2018 and 2021.  Andrew has presented twice at the Intercollegiate Men’s Lacrosse College Association Convention.  Andrew is also a technology teacher for South Orangetown Middle School.  Prior to coaching at Tappan Zee, Andrew served as a defensive coordinator at his alma mater State University of New York at Oneonta.  As a player Andrew  was a starting defenseman and captain of the men’s lacrosse team at Oneonta State.  During his senior year Andrew received the G. Hal Chase Memorial Leadership Award.  For the past decade Andrew has spoken about his coming out experience when he was an athlete in college.  In 2010 Andrew was named to the Out 100 by Out Magazine honoring the year’s most impactful and influential LGBTQ+ people.