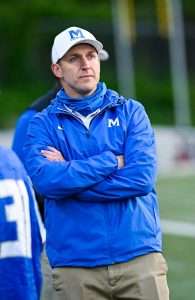 Eamon Thornton is the Head Lacrosse Coach at The McCallie School in Chattanooga, TN. Coach Thornton has the pleasure and responsibility of interacting with young men in every area of the school as a freshman English teacher, a dorm advisor, and of course, a lacrosse coach.

He grew up in Atlanta, GA and helped start the first lacrosse team at The Lovett School in 1997 as a seventh-grader. He graduated from The McCallie School in Chattanooga, TN in 2002 and from Hampden-Sydney College in 2006. At McCallie, Coach Thornton was fortunate to both play for and be mentored by Troy Kemp who taught and modelled the importance of diversity in the classroom, on the field, and in their friendship.

Coach Thornton got involved with the NILCA DEIC because he aspires to be an ally for ALL the student-athletes with whom he interacts on a daily basis at McCallie. Coach Thornton understands that the road he has walked is not the same road many of his players are currently walking and wants to be there for them as much as possible.

In addition to coaching at McCallie, Thornton has also been the Head Coach for the Swiss Men’s National Team since 2013. Coach Thornton and McCallie Lacrosse are committed to honoring the origins of the game and ALL the people involved in it.