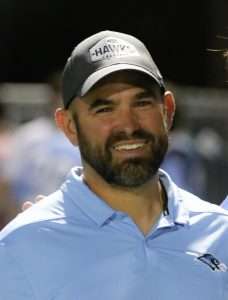 Sean Hamon is the head men’s lacrosse coach at Alexandria City High School in Alexandria, Virginia. He has been involved with the sport of lacrosse since his freshman year in College when his roommate invited him to play on the club team. During his junior year at Messiah College (University now) the club program moved to Division three status. Due to an injury he was not able to play his senior year. After college Sean found his way into other aspects of the game including becoming a referee and coaching. Sean has coached for multiple club programs including DC Express and the Richmond Hawks. He was the head men’s coach for Hanover High School in Mechanicsville, Virginia as well participating with many recreational programs as a coach and board member.

Starting his 1st year of involvement with Alexandria City High School is an absolute joy and opportunity to put the work of this committee in action.  Many know the story of T.C. Williams and the integration of the football programs based on the movie Remember The Titans.  T.C. Williams has recently been renamed Alexandria City High School. The school boasts the largest population of any school in Virginia. It also has an incredibly diverse population and is ripe to become the next lacrosse powerhouse.

Sean was moved to join the NILCA DEI committee so he could spread the love of this game to everyone regardless of background, color of skin, orientation or economic status. Additionally,  he hopes to honor the wonderful heritage of the indigenous people who have given us this game by telling their stories.

Outside of lacrosse Sean enjoys spending time with his wife of 19+ years, two wonderful children and rescue lab. You can often find them doing something fun outside or cooking away on his new grill.